The TASR-A was developed to assist in the clinical evaluation of young people at imminent risk for suicide. It was created by clinicians with expertise in the area of adolescent suicide assessment and the development and application of various scales and tools in clinical, research and institutional settings. The TASR-A is not a diagnostic tool since suicide is a behaviour rather than a medical diagnosis. The TASR-A is also not a predictive tool since there is no tool that can be demonstrated to predict suicide. Rather, the TASR-A is a semi-structured instrument that the clinician can follow to ensure that the most common risk factors known to be associated with suicide in young people have been assessed.

The TASR-A is available in the following languages:

We're not around right now. But you can send us an email and we'll get back to you, asap. 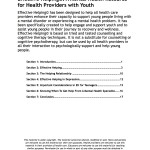